Ryan initially went to school at Walsh University planning to become a history teacher. But after encountering the Lord, he knew he wanted to live his life for Him and decided to work for the Church. Ryan has spent the last four years working as the Theology Teacher and Campus Minister at Saint Ambrose in Brunswick but was called by the Lord to find a new opportunity. He was drawn to Church of the Assumption because of its deeply spiritual heart, close knit community, and its profound humility in the Lord. Ryan’s hope is that in the coming months, he can work to establish not only a strong core team of committed volunteers, but a robust youth ministry program for both middle schoolers and high schoolers, predicated on encounter with Jesus. He also hopes to create a Young Adult Group centered on running after the Lord in discipleship.

When he is not working, you can usually find he and his wife in a coffee shop somewhere. He enjoys the nuance and variety in coffee culture and trying unfamiliar places that care about coffee as much as he does is a real passion of his. He is also an avid weightlifter and previously participated competitively in bodybuilding. Ryan is also a self-proclaimed “sneakerhead, ” meaning that he collects shoes as a hobby. His collection currently includes about twenty different pairs of Nike, Jordan, and Yeezy. His hope is to keep growing it as long as his wife lets him!

Ryan currently lives in Wadsworth, Ohio with my wife Angie. They are expecting their first child in February 2023, and we cannot be more excited!


Ryan says, “I am so excited to begin working for such a great Parish. Together, the Lord will do remarkable things through us!” 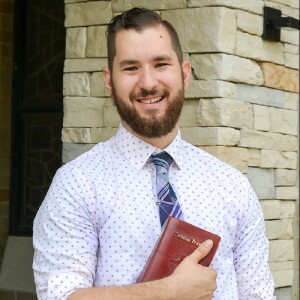